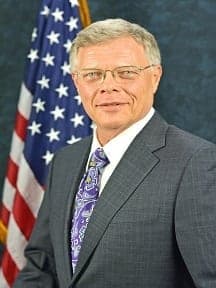 He has served as a senior staffer on The North Carolina Governor’s Crime Commission for 24 years and he is retired from the United States Air Force where he served in multiple locales including South East Asia and the Middle East in numerous capacities including as a logistics line officer, training detachment commander, Department of Defense Advisor (from 1977-78) to the Imperial Iranian Air Force, Area Recruiter for the ROTC and  Air Force Academy and Associate Professor, Arizona State University.

James has 45 years of experience in the public sector providing leadership at federal, state and local levels with subject matter expertise in strategic planning, municipal governance, financial development, federal granting, community and organizational development, implementation and evaluation.  James developed numerous programs one of which was detailing the processes and procedures for School Resource Officers which led to a $10M bill from the NC General Assembly and nearly a decade of sustained granting from the NC Governor’s Crime Commission to fund SROs statewide.  SROs grew from 200 in 1995 to over 800 officers in 2012 – and growing – resulting in safer learning environments statewide.  James has served as the principal investigator/project director on a series of research projects to analyze and propose model local projects which led to granting initiatives for dozens of municipal and state initiatives.  His technical support to numerous local government entities created and enhanced services ideas such as delinquency prevention, reentry and decriminalizing the mentally ill.

He has broad experience in logistics, training and education as well as project and program design, implementation, management and building program and organizational permanency.  He has authored or collaborated on numerous publications on community policing, community development and effective/efficient delivery of public services.  His books include: Effective Program Practices for At-Risk Youth:  A Continuum of Community Based Programs, Civic Research Institute, Inc., 2003.  http://www.civicresearchinstitute.com/epy.html . From the Bottom-Up – Reforming the Criminal Justice System with Capacity Building, Reentry and a Movement (working title), Expected release, summer 2018.