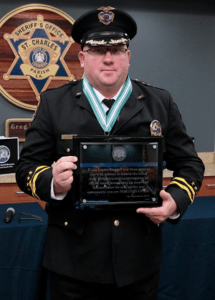 Chief Collins has a Bachelor’s degree from Sam Houston State University in Huntsville, Texas with a major in Criminal Justice, and a minor in EMS.  Chief Collins us currently working on obtaining his masters degree from the University of North Texas, with a major in Emergency Management and a minor in Criminal Justice Administration.

Chief Collins has worked in various capacities during his law enforcement career such as:  Patrol, Traffic, K-9 Unit (Narcotics K-9), School Resource Officer, Investigations.  In 2007 Chief Collins was selected to go to the SRO Division of his previous agency, and start the Truancy Program for that district.  During his tenure he worked hard to keep kids in school and focused his efforts to decrease the drop out rate, and increase the graduation rate for students.   Chief Collins also brought a variety of specialized programs to the district, and was valuable at shaping the SRO Program.

Chief Collins is a recent graduate of several of the National Command and Staff College programs.  He is a graduate of the Institute of Credible Leadership, Credible Leadership Development Program.  And in July of 2020, Graduated from The Command and Staff Program Session 009.  Chief Collins was chosen be the staff of the command college for the MAGNUS Award, which is one of the top graduation awards that can be given.

Chief Scott Collins is a twenty-year Master Peace Officer veteran, who is currently assigned as the Chief of Police and Emergency Manager for the Aubrey Independent School District in Aubrey, Texas.